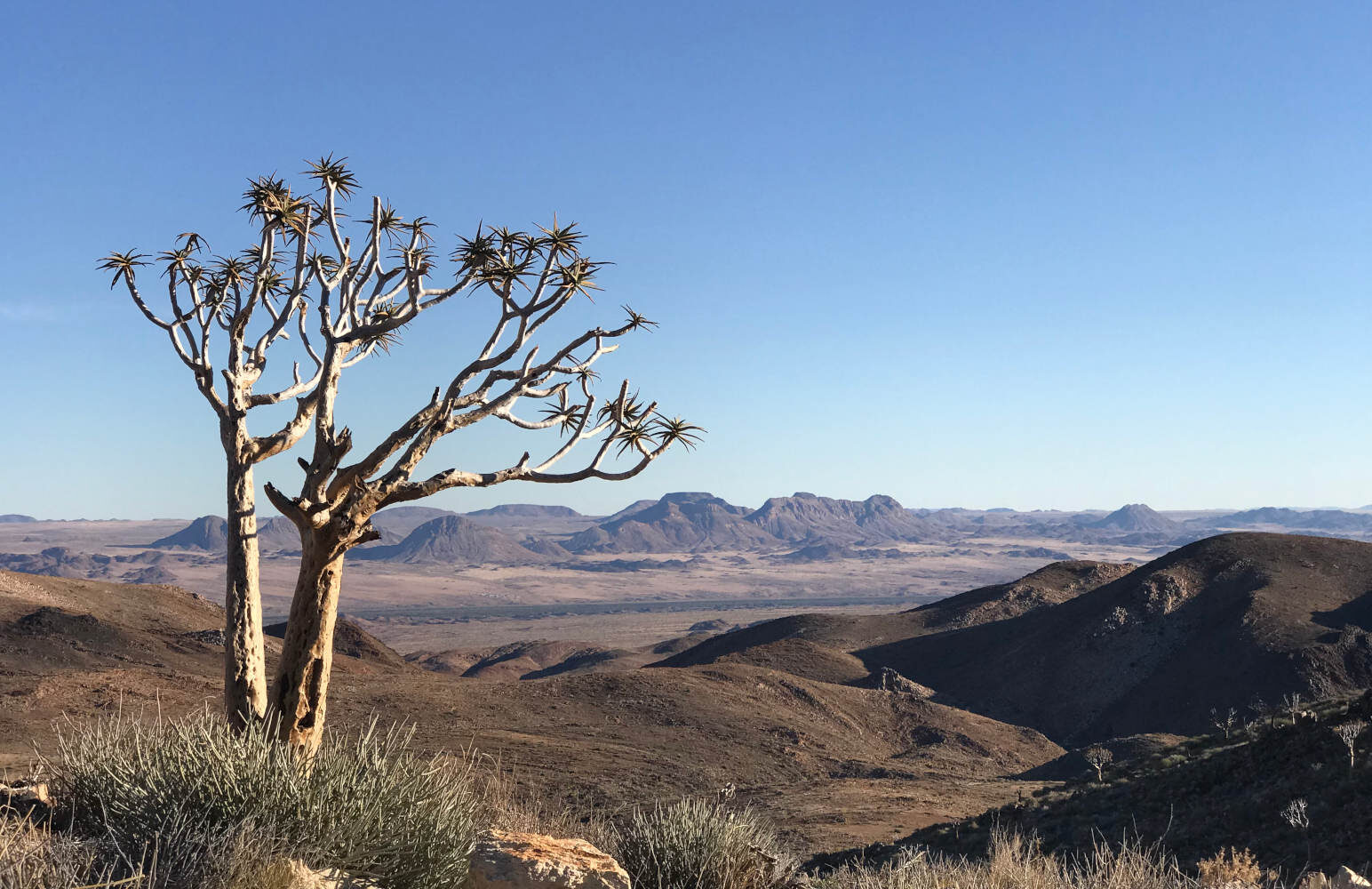 Orange River Pegmatite (Pty) Ltd (ORP) is a Namibian registered company and owner of an Exclusive Prospecting Licence (EPL 5047) located in the Karas Region in the southern part of Namibia, some 15 km north of the Orange River. EPL 5047 is situated in a mountainous desert setting with reasonable road access and is characterised by a complex geological and structural setting with good mineralisation potential amplified in the presence of large shear zones (Tantalite Valley Shear Zone) and a neighbouring intrusive mafic-ultramafic body with appreciable Cu and Ni mineralisation. A large number of well-mineralized pegmatites are also present on the property and the potential of these occurrences is highlighted by extensive, small-scale mining activities where tantalum, beryl and spodumene were extracted from these pegmatites. The name Tantalite Valley is also indicative of the extent of mineralization. An active tantalite mining operation owned by Kazera Global PLC (AIM Listed) is present at the Mining Licence 77 within the boundaries of EPL 5047.

Based on a large number of data sources, field visits, historic reports and reconnaissance work by ORP, an area of some 3.5 km x 1.5 km was selected for detailed mapping, sampling and drilling work.  It was found that this area comprises a large number of well-mineralized and shallow dipping pegmatites. During the early 1980’s, these pegmatites were sampled extensively by Placer Development (a Canadian exploration company) by means of channel samples and bulk material testing and although no quality control principles were applied during the programme, the work was of industry standard at the time. Lithium was in low demand then and, as a result, no work was done on the spodumene content and potential in the selected area. From old mining sites and reconnaissance work by ORP, it is, however, indicative that substantial spodumene potential exists within these pegmatite bodies.

During July 2019, ORP implemented a detailed mapping and sampling programme (total of 283 samples consisting of 204 channel and 79 chip samples), testing a number of pegmatites of- which fifteen well-mineralised bodies were labelled as A1, A2, B1, C2, C3, D0, D1, D2, E2, E3, E4, E5, E6, E7 and F1. This programme produced very encouraging results indicating the presence of extensive tantalum mineralization with minor lithium occurrences.

Phase 1 of drilling comprising of 23 drill holes and a total of 349.85 m has been completed on pegmatite D1, D2 and F1 and results compare well with predicted grades.

The Nickel–Copper-Platinum Group Elements (PGE) sulphide mineralisation of the mafic-ultramafic Kum Kum Intrusive Suite of Orange River Pegmatite (Pty) Ltd (ORP) is accommodated in two project areas. The Kum-Kum Suite area that comprises two Exclusive Prospecting Licences (EPLs), EPL 6940 and EPL 7295, and the Tantalite Valley Igneous Complex mafic and ultramafic mineralisation area, covered by the third EPL, EPL 5047, to the west of the Kum Kum Intrusive Suite. EPL 5047 covers the Swanson Tantalum Project as well as the Tantalite Valley Igneous Complex. The Swanson Project tantalum prospect at EPL 5047 is a separate project and does not form part of the base metal projects of ORP and is therefore not covered in this report. These ORP licences are all situated in southern Namibia, near the South African border, with the Kum-Kum Project located approximately 15 km north of the Orange River and 100 km south of the nearest significant town, Karasburg and the Tantalite Valley Igneous Complex some 20 km to the west-northwest of Kum-Kum. The EPLs comprise an area of approximately 78,761 hectares in extent and fall within the Karas Region of Southern Namibia.

Geologically, the area forms part of the northern zone of the Namaqua Mobile Belt, a region of high-grade metamorphism of the amphibolite and granulite facies. Granitic rocks predominate although there are extensive tracts of metasedimentary and metavolcanic lithologies. The area is known for its economically important mineralization notably the Okiep copper deposits, the base metal deposits in the vicinity of Aggeneys and Gamsberg, the copper mineralization of the Haib volcanics, and the spodumene/beryl/tantalite mineralization of the Namaqualand pegmatite belt.

EPL 6940 and EPL 7295 cover almost the entire tholeiitic mafic-ultramafic intrusions, of the Kum-Kum Intrusive Suite also known as the Kum-Kum Igneous Complex. Regional scale exploration conducted by Rio Tinto Exploration Ltd and Falconbridge Ltd in the early 1970’s demonstrated that the Kum-Kum Suite hosts significant contact- and disseminated-type Ni-Cu sulphide mineralization (pyrrhotite-chalcopyrite-pentlandite-pyrite). Ni and Cu grades attained by Rio Tinto and Falconbridge ranged between 0.21 – 0.58 % Ni and 0.30 – 0.50 % Cu for mineralised drill hole intersection thickness of up to 30 m. These were the only results the company was able to obtain. There is no indication that PGE and/or precious metal test work was conducted at the time. In addition, no detailed geophysical work has been conducted to date on any of the EPLs and the sub-surface distribution of the sulphide mineralization remains unexplored.

Significant nickel anomalies, with corresponding high copper values, were obtained on the farms Keimasmund 98, Orange Fall 101, Vaaldoorn 91 and Nautsis 92, which falls under EPL 6940. The anomalous nickel areas on Keimasmund 98 and Orange Fall 101 occur mainly on the western side of Swartberg with values up to 408 ppm Ni. An area measuring 3 km by 1.5 km had soil geochemistry values exceeding 150 ppm Ni against a background of 35 ppm Ni. During the investigation, no signs of visual mineralization were observed by the Falconbridge geologists in the surrounding outcrops.

The Kum-Kum Project is an early stage exploration project, however, work completed to date by ORP has demonstrated that the Kum-Kum Intrusive Suite meets the mineral-systems-approach criteria for exploration targeting magmatic-hosted sill/dyke complex-type Ni-Cu-(PGE)-(Au)-(V-Co-Cr-Fe) sulphide deposits. The suite also fulfils the descriptive mineralisation model for magmatic-hosted Ni-Cu-PGE sulphide deposits, applied to similar economic deposits and economic mineralized magmatic systems around the world, such as Jinchuan, Huangshan, Huangshandong, Hongqiling, Limahe, Qingquanshan, and Qingbulake in China and the Eagle and Eagle’s Nest deposits in North America (USA and Canada).

Based on limited field investigations and a review of the available literature, ORP considers the Kum-Kum Intrusive Suite under-explored, and highly prospective with a high discovery potential for magmatic-hosted Ni-Cu-(PGE)-(Au)-(V-Co-Cr-Fe) sulphide deposits and has identified a number of primary exploration targets.

The Karibib Project is owned by Goas Pegmatite Exploration (Pty) Ltd (Goas) through its Exclusive Prospecting License, EPL 4663 which covers some 40 986 ha in the Erongo District in central Namibia. The EPL is located approximately 45 km south of the town of Karibib, 135 km west north-west of the capital Windhoek and approximately 130 km east north-east of Namibia’s port-town of Walvis Bay. EPL 4663 is located 26km south of the active Navachab Gold Mine owned by QKR Namibia Ltd and 50km south of the significant Twin Hills Au discovery made by Canadian listed Osino Resources Corporation in 2019.

Goas plans to systematically explore EPL 4663, with a view to defining a JORC compliant mineral resource.

EPL 4663 is situated within the same mineralisation zone and shares striking geological similarities with the Navachab Gold Mine and Osino’s Twin Hills deposit. Osino’s success arises from their efforts to re-explore portions of the Kalahari Gold Field covered by their exclusive prospecting licenses. Companies such as Goldfields, Anglo American and various junior explorers historically explored these areas and EPL 4663 during the 1980’s. These early explorers did not have the benefit of sophisticated modern exploration equipment and techniques such as those used by Osino in making its multiple recent discoveries.

Goas has conducted a re-evaluation of historical exploration results and incorporated modern-day geospatial datasets over EPL 4663. This re-evaluation produced new geological perspectives and indicates significant exploration potential that warrant further detailed exploration. From the investigation Goas discovered a Northeast-Southwest trending, 1 to 2.5 km wide and 20 km long structural feature corresponding with known mineralisation and with historical base- and precious-metal soil and stream geochemical anomalies.

Based on remotely sensed unsupervised land-classification, it is indicated that approximately 40 – 60 % of this highly prospective structural feature is covered by eluvial, alluvial and/or rock-float regolith, thereby suggesting that regolith mapping and orientation, which has to date not been conducted at all on the property, is also likely to be a critical factor in locating unknown mineralisation and expanding on known mineralisation within the prospective structural feature. The reinterpretation of the significance of low order historical anomalies is likely to be fruitful, as is the case with Twin Hills.

Goas has done some reconnaissance work on its EPL but did not made sufficient progress in its exploration programme, the samples were not sufficient in numbers and spacing to be considered truly representative or spaced close enough to demonstrate grade continuity to allow any of the exploration targets in the permit areas to be considered for classification in terms of a JORC resource. For this reason, the property of Goas in terms of Cu-Ag-Au-(W) skarn and orogenic Au sulphide mineralisation is considered an exploration project at this stage.

The Bitterwasser Project is comprised of four exclusive exploration licenses, EPLs 7614, 8101, 8102, 8103 all held by BME, and EPL 8104 which is shortly to be transferred to BME by Mr Lisias Pius, a director of BME, at no cost after the approval of an application to transfer the license has been approved by the Ministry of Mines and Energy (“MME”). Together with EPL 8104 the project covers a total area of 343,894 hectares.

The company is in the process of advancing a lithium project that is situated in the western part of the Kalahari Desert. The area is characterized by reasonable road access and a wide expanse on Karoo geology substrate that is covered by red Kalahari sand dunes and well developed saltpans. Work to date was mainly done on the Bitterwasser pan complex situated on the farms between the settlements of Kalkrand and Hoachanas, in the Hardap region of central Namibia. The potential of Bitterwasser type mineralization does however extend to a number of similar pans in the region.

The Bitterwasser saltpan complex adheres to first order geological and environmental principles that are required for the development of significant lithium clay and brine deposits. These requirements include, geographic placing within an arid latitudinal belt, the presence of Cenozoic-aged fault-bound terrestrial sedimentary basins, proximity to older felsic, carbonatitic and/or alkali volcanic sequences and the presence of regionally extensive brine aquifers.

The Bitterwasser saltpan complex is comprised of several individual lithium-, potassium- and boron bearing clay substrate saltpans and is associated with the depositional development of the western portions of the greater Kalahari basin. It lies remarkably close to the inferred source of mineralisation, which is the Brukkaros volcanic field and elevated groundwater temperatures, as high as 39 °C, have been reported from water-supply boreholes in close proximity to the saltpans. These aspects suggest the presence of a deep-seated geothermal heat source and mineralisation provenance. The thickness of the sedimentary packages which make up the Bitterwasser saltpans ranges from 30 m to more than 100 m thick and are of sufficient size and porosity to accommodate substantial brine aquifers.

On neighbouring EPLs, prospecting work was done on the main Bitterwasser saltpan and consisted off the drilling off a number of hand-auger drill holes, which confirmed anomalous Li values in the clays of the pan. A ground electrical conductivity survey (EM) was conducted and the results indicated the existence of an anomalous electrical-conductive body situated approximately 20 meters below the current groundwater level. It is likely that this represents a dense saline and/or brine aquifer that will be a highly prospective target for lithium brines.

This potential is also supported by geological and environmental indicators identified through reconnaissance exploration efforts which include water-quality data indicating high total dissolved solids, the electrical conductivity anomaly, the high grades of lithium from hand auger drilling and the presence of structural features that indicate an enclosed basin setting.

Typically, economically significant saltpan complexes around the world are associated with anomalous K and B values. The reduced clay-rich lithology documented at Bitterwasser’s main saltpan yielded B values of > 400 ppm and K values consistently > 1.8 wt. %. This emphasises the geochemical similarities with other globally significant saltpan complexes.